Vote Trump? What do you stand for? 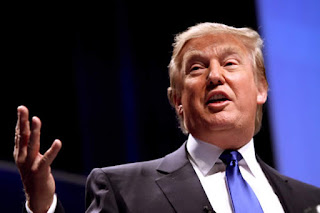 If you choose to vote for Trump today you are choosing to vote against the constitution of the United States of America, you are voting against the principles of our founders.

Those great men fundamentally believed in the idea that the vices and desires of petty individuals would need to be contained and channeled through a constitutional framework, through a system of checks and balances. This was done to ensure the continual liberty and prosperity of the people and to prevent the tyranny of powerful men from dominating the destiny of millions.

They did not believe men to be angels, nor saviors, they knew them to be as all humans are, especially the “great” men in history; flawed, prone to mistake and hubris, and often more concerned with keeping themselves in power than serving the interests of people. They were not blinded by the promise and hope before them, but rather saw clearly the dark and tragic history of mankind and all the dangers of an unrestrained populist revolution.

Thus was born a constitutional government of the people and for them, but not bound by the passions of the mob; a Republic of liberty to endure through the ages.

Such was the beauty of the system they designed and so powerful the timeless values that underpinned it, that those in power would be prevented from the worst of excesses while incentivized to practice virtue in the public sphere, to put the nation ahead of themselves.

Instead of pretending people would always behave well, it channeled their vices and petty disputes so that no one political force could dictate terms to the other, thus forcing compromise and the national interest.

The fact that our first President, George Washington, did not trust himself to become “king” of America as many of his supporters wanted, is a testament to the caliber of human being he was and it points to the very hand of providence guiding the birth of this country.

Yet you think you are supporting for Trump because he will somehow restore the country to greatness?
Where Washington’s honesty and integrity permeated every fiber of his being, Donald Trump lies at every opportunity, simply making things up as he goes along. He has lied about his businesses, about his success, about his political ideas.

He speaks not as a great statesman or warrior leader good men would gladly follow into battle, but rather as a snake oil salesman, with speeches filled with empty boastful promises of being “great” and the “best”, much akin to a late night infomercial. Where there was an inherent humility and grace to Washington, Trump displays an undeniable megalomania, possesses an ego that can’t be contained, and is clearly seeking the cross of the Presidency not because he feels it is his duty, but because he feels it is his right.

When you ask yourself who to entrust with power, look to those who are there reluctantly out of a sense of obligation, and those who recognize the immense responsibility they may one day assume. Do not look to those who boast of themselves, who uplift themselves and tarnish others, to those who use fear and hatred as weapons and belittle those who challenge them.

If that is what you think makes a good leader then by all means cast your vote in favor of Trump, but do not think that you are at the same time voting to “restore” the country to what it once was.

A vote for trump is a vote against the constitution and against everything the founders of this nation stood for. It is a vote in favor of the love of status and glory over the love of liberty and virtue. Donald J. Trump has said:

“We are going to have to give up certain privileges that we’ve always had.” (Referring to religious liberty, privacy and free speech in the wake of the ISIS attack in Paris).

“bring back a hell of a lot worse than waterboarding.” (In reference to the use of torture against terrorism suspects)

Donald Trump believes that the 1st, 4th, 5th and 8th amendments to the Constitution are “privileges” that can and must be “given up” for the sake of security. He seems to also believe that he has a right to force members of the United States military to carry out illegal orders:

“They won’t refuse. They’re not gonna refuse me. Believe me.” (In reference to the military disobeying order to kill terrorist families or commit acts of torture.)

If you stand for that, you stand for raw power over measured leadership, for brutal expediency and cruelty over compassion and dignity.

Again, if you think that is what is right, if you think those values will make our country “great” again, then vote for Trump, but do not be a fool or a coward and own it, embrace that dark destiny for what it truly is.

Do not deceive yourself into thinking you are also serving the cause of liberty and limited government or that you are honoring those who paid the ultimate price to safeguard the freedom of our nation. You are in fact spiting on their graves and the graves of Washington, Jefferson, Lincoln and any other truly great American who actually fought for the constitution.

Trump, like all populist strongmen is about creating a cult of personality around himself. Those that follow him will find out in due course what that his “leadership” means for the future of this country.

This is your last chance to decide, what do you stand for?
fascism freedom liberty populism republican Republican primaries Trump tyranny

Common Ground on Guns is Possible

Another horrible tragedy perpetrated by a madman for reasons as yet unknown. Whatever his motivation, the President’s characterization of the Las Vegas massacre as an act of “pure evil” is probably the most truthful thing he has said in months. Yet before the victims had even been given a proper burial activists, celebrities and politicians were already taking aim at the 2 nd  amendment and calling for more gun control. It is a sad testament to the state of our country that we cannot refrain from trying to score political points and insult one another for even one day after something like this occurs.  Some people even went so far as to imply that those who attended the country music festival were complicit in their own murders because they might have supported gun rights and voted for Republican candidates. Because of course everyone knows that listening to country music makes you a gun toting ignorant Republican. What is sadder still though, is that there are things we can maybe
Read more

You want to be left alone? Fight for it.

June 08, 2013
Limited government is based on the idea that there are areas in our lives which do not concern the state, which are our own personal and private business and which only we can reveal at our discretion. If you sign up for Gmail, or Facebook, or any other free online service, and that service requires you to give up some of your private data as a condition of use, then it is up to you to do so. You are free to use paid alternatives, or learn how to use free tools in order to communicate without having all your data stored and sold to third parties or used to create targeted advertising. But what happens when the government demands that same information in order to carry out one of its functions? Unlike transactions with a private entity, you cannot simply opt out of government intrusions because by default you are a member of the body politic of the state. As long as you are a citizen of the country, you will be subject to the governing powers of the state. This is why it is a bigge
Read more

January 22, 2013
With the preceding thoughts from parts 1 and 2, we arrive at just why a professional army is such a problem. While any permanent public service can be problematic to a republic, for the reasons just mentioned, a professional military is extremely dangerous because its purpose is war itself. Due to its extreme nature, war necessarily subordinates everything to the goal of victory, failing to do so results in defeat and ruin. In a situation where the survival of the people is at stake, it even makes sense to restrict the very freedoms of a republic in order to divert as many resources as efficiently as possible towards the defeat of the enemy. This is only justified though in the case of a purely defensive war or a war that directly serves the interest of the all the people in the republic. Leaving the issue of the morality of offensive war itself, we can say for now that the principles of a republic would not be opposed to the idea if the people as a whole would benefit from it s
Read more